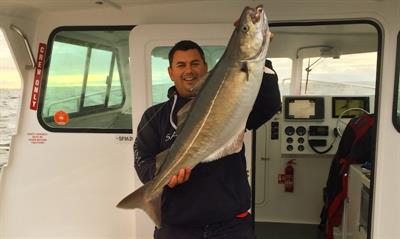 Most people know that there are some uncomfortable truths about the UK fishing industry, not least the oft quoted phrase: "We export what we catch and we import what we eat." This is just one of the crazy dilemmas that the UK fishing industry finds itself in as it navigates the pressures and complexities of delivering fish to the catering and retail markets here and abroad.

After years of working in the Fishing industry, Caroline Bennett, Founder of Sole of Discretion in Plymouth, doesn't mince her words when it comes to explaining why she's approaching business the way she does. She, more than most, understands how incredibly complicated the issues and challenges are. It is an industry upon which thousands of livelihoods and millions of diets depend and yet positive change can be so hard to come by.

The direction Sole of Discretion has taken may be seen as far from conventional. "We sell anything that the fishers catch. Some of these species are rated ‘red – or fish to avoid’ by the Marine Conservation Society (MSC)." says Caroline. Admittedly, this is not how we'd expect a sustainable fish sourcing story to begin!

So, how does Sole of Discretion justify landing vulnerable species at a time when we are working towards sustainable fishing methods? Caroline goes on to explain: "When looking at the status of a stock, we believe it important to view the ecosystem in its entirety, rather than focus on individual species. This is one of the primary reasons that we favour using 'method of catch' over ‘species’ to determine what we will offer to our customers, in the understanding that fishing methods play a large role in the health of the entire ecosystem, and hence the stock."

For stock levels, Sole of Discretion consider two things:
1.      The impact that fishing on one species has on another species.
2.      Whether or not that stock is in danger of collapse.

"If you don't do the first, then as species fluctuate up and down against each other and against the total ceiling that the seas can support, a constant stream of species that are sold as sustainable fisheries will be stopped as stock size shrinks below conventionally accepted levels. These species then become known by fishermen as choke species. This means it is a quota species that - even when not targeted – is caught anyway and prevents the fisher from then fishing for non-quota species, or for species they have plenty of quota for."

Caroline cites an example of a situation in Newfoundland a few years ago when Cod were so badly overfished, the species couldn’t recover.  At first, the fishermen were up in arms. However, lobsters then began to flourish because there were no fish predating on their lavae. Lobsters soared in number and the fishermen celebrated their ability to sell a more valuable product more often. Of course, this is a slippery and undesirable slope – and is most definitely not sustainable.

Caroline appreciates this fact and demands an ethical approach to procurement is undertaken. "Sole of Discretion prefers to look at the individual catch method of the fisher to determine the acceptability of species and size of species." For example, a small Ling caught in a gill net would not be acceptable to Caroline, because it implies that either the mesh size the fisher is using is too small, that the soak time is too long, or that generally the fisher is fishing without integrity, skill and knowledge. If on the other hand a handliner caught a small ling, Sole of Discretion would accept that on the basis that;
a)   the overall impact of a handliner is the least damaging to the sea’s ecosystem;
b)   the policy is not to discard or waste unpopular species or sizes of species, and
c)   the condition of the overall stock status is driven not by the techniques of the handliners but by some of the larger fishing vessels that catch a vastly higher tonnage of one species per haul.

Caroline's desire to support small-scale fishers is guided by Slow Food principles, namely that we should continue to find a market for their fish even though the species is under threat. The only exception she makes is for critically endangered species. Similar to wonky veg being rescued from supermarket rejection and ploughed back into our fields, why should we waste perfectly good fish from being thrown back into the sea?

It’s important to remember that if these fishers were to give up what they do, we would be in danger of losing their skills and knowledge forever. With the increasing industrialisation of our seas and the use of large, damaging fishing vessels it’s imperative that we work to preserve and protect our small scale fishers. That’s one of the reasons why fresh-range is supporting Caroline’s initiative so that we can all be informed and educated about the way the fishing industry can build back better.

"This month, Sole of Discretion's Ling of all sizes are being caught by the handliners and larger specimens by the small scale gill netters. Both fishers’ methods are targeting Pollack but in so doing will also catch Ling. Bigger boats might discard the Ling as it is a relatively undervalued species, but it is our commitment not to waste any of a fisher’s catch and eat everything they land." explains Caroline.

Sole of Discretion have been working with the Soil Association, Exeter and Plymouth Universities and The New Economics Foundation to come up with a new Standard exclusively aimed at the under-10-metre boats. This would help to recognise them as a distinct fishery. "It is nigh impossible for the small boats to fish a stock to depletion, and yet, the smaller boats are always the sector that suffer the most when draconian action is brought in to damage-limit the decline in stocks. This is often long after the smaller boats have been demanding protection of a species or habitat. There are countless examples of this, bass and cuttlefish being two of the most recent and glaring ones." says Caroline.